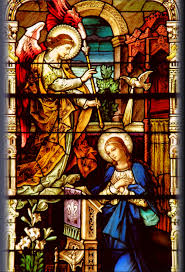 I had heard and read over my lifetime that our Blessed Mother Mary is a role model for women. Until lately I did not see Mary as a role model.  I only recognized that Mary was holy, beyond reproach, especially chosen by God for His great task of Salvation. For many years I discounted our Blessed Mother as having nothing to do with the life I was living. Mary was a virgin throughout her life. I am not. Mary was the perfect mother. I am not. Mary heard God’s voice in her everyday life, pondered all that He had done and was doing, lived in perfect union with the Law of her people. Nothing of that was like me. I have known myself always to be imperfect, to be struggling to make sense of what I experience. I make mistakes. I have run away from my faith at times. None of that is like Mary.

While praying the joyous mysteries of the rosaries, I have come to some startling conclusions. In these first five mysteries of the rosary, where we focus more on Mary’s responses to God’s grace in her life, there are similarities to what I have experienced in my own life. I have not responded with the grace and generosity that Mary exhibited, but in my own way, over time, I did respond in a positive way. So perhaps in Mary is a role model for me, an important one that I overlooked for many years.

The first Joyous mystery we pray is entitled “The Annunciation.” In this mystery Mary is visited by an angel, who asks Mary to be the mother of the Son of God. Mary is only 14 years of age and is betrothed to Joseph, with whom she will soon live. According to the customs of the time, the betrothal is a marriage. By this ceremony, by this accepting of promises, Mary becomes Joseph’s wife, though she does not live with him until the marriage is finalized at the wedding ceremony. Mary accepts the angel’s request to be the mother of Jesus and bring the Messiah into the world. She accepts the will of God for herself, giving herself unconditionally to God. Mary knows the Laws of her people, but trusts that God’s plans won’t be thwarted and that she can depend totally on God.

Just a couple of months after I married Larry, I suspected that I was pregnant. I was 25 years old. I had been in a disastrous but short previous marriage and had lost a child in a miscarriage. I was concerned and afraid about being pregnant again. What if this marriage didn’t last? How would I care for myself and my child? Given my previous experience, my fear was warranted.

Though I don’t remember exactly what I said as the doctor examined me, I didn’t want to be pregnant. The testing to verify the pregnancy would require that I wait until the following week before being certain about the pregnancy. The doctor advised me that if I was pregnant and wanted an abortion I could travel to California or New York, where I could have an abortion without my husband’s permission. This was before Roe vs Wade made abortion legal in all states. In addition, the doctor said he had medication that I could take that might bring on my period if I wasn’t pregnant. In what turned out to be the most important decision of my life, I chose to wait until the following week for the testing to be complete. I said something to the effect that if this was God’s will for me, then so be it. While not said with the joy and certainty that Mary gave her “fiat”, my answer was the same.

I have wondered in the ensuing years if the medication the doctor was offering me was an early form of the abortion pill. Had I taken the medication the doctor offered our daughter Erin might not have been born, or she might have been born disabled or had some kind of birth defect. What was it that encouraged me to follow God’s will? Had I learned something or perhaps matured somewhat after the first marriage and miscarriage? If I had learned something, I couldn’t have said at that time what that was. I certainly didn’t feel any wiser.

The next months were difficult with nausea, vomiting and being very uncomfortable especially during the Phoenix, Arizona summer. In November of 1971 our daughter Erin was born, and she was perfect. Unlike our Blessed Mother, I gave birth in the cleanliness of a hospital delivery room and didn’t have to walk or ride a donkey to get to the place where I would deliver my child. I rode in an old pickup truck, which was uncomfortable to be sure. The springs were old and almost useless so it bumped over every little stone in the road. The hospital was just about ten miles from our home. The experience of delivery was almost pain free, unlike what Mary must have experienced delivering a child without the help of others. I was frightened, but my family was around me. They all rejoiced at the birth of my daughter. Mary had no one but Joseph. No one, but Joseph, knew Mary’s secret. No one, except strangers, rejoiced at the birth of her Son.

No doubt Mary was uncomfortable throughout her pregnancy as well. She lived without air conditioning in a hot environment, unlike me, who had every convenience.  Walking or riding to Bethlehem must have been excruciating given the weight of a near term child. How did Mary endure it? Did she whisper a prayer with every step she took? What were Mary’s fears as she and Joseph journeyed to Bethlehem? Would the couple find a clean place for the delivery? Would there be anyone to help Mary? Did Joseph know what to do? Would there be complications with the delivery? Surely Mary had seen enough deliveries to know that not every delivery was without danger both to her and the baby. How would she maintain her calm and faith as the birth pangs began and became more insistent?