Karen’s friend, Shawn, wrote a post recently about the Blessed Virgin Mary and the Way of the Cross. According to Shawn and others, after Jesus’ Ascension, Mary would often retrace her Son’s steps on that final fateful day. She would pass each of the places where she saw her Son on his way to Calvary. Later, when Mary had moved to Ephesus with John, she built a little Way of the Cross in her garden and used the area as a place of meditation. I had heard about this part of the story before. Shawn had suggested that we think of Mary as we pray the Stations of the Cross. That might be good if we do the stations by ourselves, but I can’t imagine how I could when the priest is leading a large group. I will try anyway tomorrow. 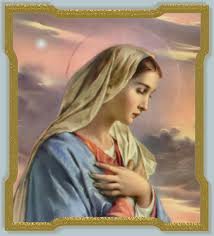 I have often pondered what Mary thought, especially after her Son had gone. Did her life seem like a mystery or did she wonder if it was all real? There are parts of my life that I question. Once the time is well past, it is hard to remember all the little bits of an event. Sometimes I think that I just dreamed the event, that it couldn’t be true.

She was so blessed and yet how difficult her life must have been.