This week’s lesson begins a study of David, of his calling and his kingship which sets the stage for the greatest King, the Lord Jesus Himself. I have read both chapters a couple of times and also the commentary and answered about half of the questions. This afternoon I decided to re-read the chapters slowly to see if I could glean some further information. It amazes me how much can be learned and understood when I read slowly, pondering each line. 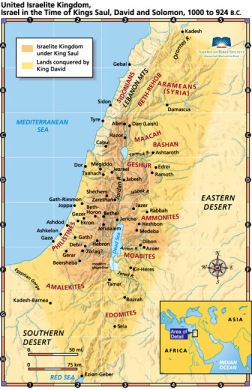 In  the previous chapter after Saul has become king and fought many battles, he disobeys the Lord, offering sacrifice before Samuel arrives. He also fails to kill all of the enemy Amalekites which God had instructed him to do. So God withdraws “his spirit” from Saul.  Saul is told that God no longer  favors Saul, that He will pick a new king.

Now we see the prophet Samuel being instructed by God to go to Bethlehem to anoint the person whom God has chosen to be the future kind. Samuel is still “grieving” over Saul and is afraid of him. He thinks Saul will try to kill him when he finds out what Samuel is going to do. God instructs Samuel to go to Bethlehem to offer sacrifice, thereby disguising his true purpose.

As Samuel approaches the city, the elders come out to meet him and ask him if his visit is a peaceful one. Why is that? Did they always expect trouble when Samuel came? Is it well known that there is a rift between Samuel and the king? Samuel assures them that his visit is peaceful and invites them along with the family of Jesse to the sacrifice. Since we are told that the family of Jesse is not an important one, would anyone have wondered what the reason could be that they were invited? The Navarre Bible states that there is no genealogy given for Jesse, therefore the family was unimportant.

As everyone is coming to the sacrifice, Samuel begins to apprise the sons of Jesse. God warns him that he should not judge by appearances – Eliab has a lofty stature but is not God’s choice. It is written “not as man sees does God see, because man sees appearances but the Lord looks into the heart.” Each of the seven sons who are present are rejected by God. Curious that God has not indicated anyone of the seven, Samuel asks Jesse if there are any more sons. Jesse says that the youngest, David, is in the fields watching the sheep. Samuel asks that David be brought to the feast, which he is. When Samuel sees David, the Lord instructs him that David is God’s choice.

Next we learn that Saul is taken with fits of melancholy. “The Lord’s spirit had departed from him”. I wonder what that means – could he find no joy, no purpose in his life? Saul was tormented by an evil spirit – given the life he had led, the constant wars and loss of life and knowing that God had put him aside as king, Saul might have suffered from clinical depression. His servants suggest a musician to calm his spirits, and David is chosen for “the Lord is with him.” Saul agrees, and David is taken into the service of the king. He pleases Saul so much that he is made “armor bearer”. This is a person who not only carries extra armor for the warrior but one who stands by his side in time of trouble.

Once more the Philistines are coming after Israel. This time they have a champion – a superb warrior by the name of Goliath. Goliath is a giant in his time standing at 6 and 1/2 feet tall and amazingly strong. The armor he wears is heavy and made of bronze. He stands on the Philistine side of the battlefield and taunts the Israelites to a duel. If someone can defeat Goliath, the Philistines will capitulate and be servants of the Israelis.  He frightens both Saul and his men and for 40 days (interesting number) shouts across the valley at the opposing army. Finally David is sent to bring supplies to his brothers and receive word from them to take back to their father. He questions the Israeli soldiers about Goliath and is told the king will reward the man who kills Goliath. His brothers hear him asking questions of the others and accuse him of trying to make trouble. Apparently, there is a sibling rivalry going on here – perhaps since David was anointed by Samuel.

David volunteers to fight Goliath and is given the king’s armor. It is quickly evident that David cannot fight in heavy armor, so he steps forward with his own weapon – a slingshot which he has used to kill prey which had attacked his father’s sheep. With one stone David is able to dispatch Goliath. He then cuts off Goliath’s head, and the Israeli’s go after the Philistines, chasing them home and killing many of them  and taking spoil from their camps.

Whether it is saving his sheep from a bear or lion or defeating the Philistine warrior, David gives God the credit. In addition, he is concerned with punishing someone who insulted the army of the Living God. David trusts God to deliver the victory to him. “For the battle is the Lord’s, and He shall deliver you into our hands.”

The story in Samuel 17 when David’s brothers wonder why David is there, accusing him of just trying to watch, being a little bother, was so interesting. There was some real sibling rivalry there. I can imagine the brothers words when David volunteers to go after Goliath. First thinking him dopey for even trying, then being upset that he might dishonor the family, wondering what their dad would say when David gets killed by the giant and hoping that they were not blamed for David’s actions. I wonder how excited they were when David did kill Goliath. Were they patting each other on the back and beaming – that is our brother – relishing his victory as though it were their very own?