How did St. John begin his ministry to preaching and baptizing?

We have read in the Gospel, Luke Chapter 1, 5-25, how the angel Gabriel brought the news of John’s birth to Zechariah, a priest of the temple. Zechariah didn’t believe Gabriel and was struck “dumb” until John’s birth. Further on in that chapter, verses 57-80, we see the birth of John and read Zechariah’s canticle where he blesses the Lord that the Messiah is coming – now growing in the Virgin Mary’s womb – and that his son John will help prepare the people for His coming. We don’t know how long John’s parents lived after he was born, though we are told that they are both old. At some point in John’s early life, he likely went to live with the Essenes, a Jewish sect which followed strictly the Laws of Moses, preparing themselves for the coming of Jesus.

At what point did John know that the time had come to begin his work? How old was he? We don’t know. He was born 6 months before Jesus and Jesus begin His ministry about the age of 30, so it is easy to assume that John began his baptizing shortly before that. A year perhaps or more?

How does one go about announcing good news? I am reminded of the election of our new pope, Francis. The cardinals come to the window of the Vatican, with all the news media watching and broadcasting the results, and they announce the “We have a Pope! – Habemus Papam!.” In John’s day, how was this done? 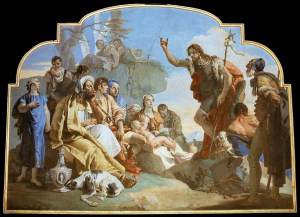 How did a prophet announce himself? The people were waiting for the Messiah – perhaps it was easy to get their attention. Perhaps the prophet stood in a public place, where people were gathered for some other event, and announced himself. Anyone with words that were out of the ordinary would be noticed. Perhaps they started very small, gathering just a few individuals to them, who then went out and gathered others.

Where were the places that John baptized, how close were they to the public thoroughfares, that he might be noticed, preaching to all who would stop and listen, if only for a moment? Since people were expecting the Messiah, if someone’s words seemed “from God”, it might be easy to garner attention. The Jewish people were, for the most part, a religious people. Their lives revolved around the traditions handed on to them by their forefathers. There were no books or other reading materials for the common man, no entertainment besides the occasional marriage celebration, the birth of a new child or an event put on by the king (if there were any). Each year with great rejoicing families went “up to the Temple” to celebrate the great feasts which God had given them. Would the time of one of the feasts be an appropriate time to capture the people’s attention?

The Bible doesn’t tell us how or when John began his ministry. But he did capture a lot of people’s attention — King Herod, whom John had denounced for his illegal marriage to his brother’s wife, the Pharisees and other Temple authorities who were learned about the Scriptures and wondered if John were the promised Messiah, Andrew and John who would later follow Jesus, and many other devout Jews who were waiting for the Messiah and were conscious of their sins, their falling short of God’s commandments.